All Categories
FAQ
What is Spaced Repetition System (SRS)?
3

What is Spaced Repetition System (SRS)? Does the app use traditional or simplified characters? What is the HSK?

What is Spaced Repetition System (SRS)?

You have probably experienced the frustration of learning several words and then forgetting them a few days later. There is a system that will allow you to learn much more vocabulary in less time without forgetting everything!

This system which is called Spaced Repetition is based on neurolinguistic research which shows that memory follows a curve of forgetting and that it is possible to take advantage of it to maximize memory. 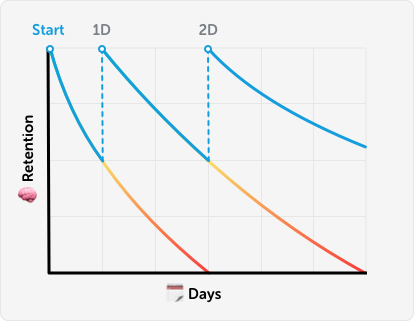 Hanpath's smart flashcards takes care of all this complexity for you. We calculate the memory curve for each of the words you learn and present you every day with the words about to be forgotten.

💡 We also uses active memory which is one of the keys to long term memory. All of our flashcards are interactive and require thinking about the answer rather than passively choosing from an answer list.

Was this article helpful?

0 out of 0 liked this article